Do you ever wonder where the word or even the origin of heels came from?? well, as someone who has been wearingÃ‚ high heels all my life I often wondered where did this fashion come from, why heels? there must have been a reason why this whole fashion started? so after many hours of research and reading about highheels I came to the following info which could be useful to all of you reading this blog: 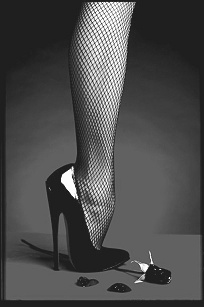 In approximately 1500s heels were introduced in response to keeping a rider’s foot in the stirrup. You might ask what is a stirrup?? well back in 1500s there were no cars and people rode their horses and yes, they did have shoes but those shoes had no heels and the bottom of the foot would slip through the stirrup.Ã‚ A stirrup is according to the dictionary “a loop, ring, or other contrivance of metal, wood, leather, suspended from the saddle of a horse to support the rider’s foot.” So as you can see there was an actual need (necessity) to add heels to the shoes.Ã‚ Now the height of the heel is a different story and it came later and of course the whole fashion about the shoes and the heels as we know it today came much later.

One might say fashion derived from what was necessary,Ã‚ Ã‚ Human’s creativity is amazing to me.Ã‚ Later on higher heels were worn by people who were short and they wanted to be perceived taller and what better way than to wear heels.Ã‚ The demand for such riding heels became “court-only” wears and were worn by French men.Ã‚ By the late 1600s men’s heels were commonly between three and four inches in height.

Soon, fashion-conscious noble men and women of the French court were caught on high-heeled shoes.Ã‚ High heels became related to opulent wealth.Ã‚ Throughout the seventeen and eighteenth centuries high heels became a noble fashion among French men as well as women.Ã‚ It wasn’t until late 1700s after French revolution that high heels lost its fame because it was the end of the aristocracy and wealth era which heels were associated to.
Ã‚
America’s first retail shoe store started in 1794 in Boston by Quincy Reed.Ã‚
I like to get into more details about modern shoes and the different kind of heels and their origins.Ã‚ You can check my other blogs more about heels.

This entry was posted on Saturday, September 22nd, 2007 at 7:12 pm and is filed under High Heel History. You can follow any responses to this entry through the RSS 2.0 feed. You can leave a response, or trackback from your own site.

2 Responses to “Origin of Heels”